Infantile Colic is a condition that is not easily understood and is defined as excessive, frequent crying in a baby, who appears to be otherwise healthy. It's a very common problem in young babies. Although there are no long-term consequences of this condition, colic is extremely distressing for both the baby and the parent. Long bouts of colic can cause family tension due to parent/carer sleep deprivation and can be responsible for stress, anxiety and even depression. Thankfully, babies usually grow out of colic around 12 weeks of age.

There are several issues believed to cause colicky symptoms; however, 78% of Healthcare Professionals agree, the most common cause of colic in young babies stems from digestive or feeding problems, which include swallowing air and trapped wind*. Changes as simple as choosing the right baby bottle can help avoid the swallowing of air and thereby, put a stop to wind-related colic in babies.

There are many baby bottles on the market claiming to be “anti-colic”, yet it is important to recognise that not all “anti-colic” bottles are the same and to understand the physics behind the bottle mechanics. 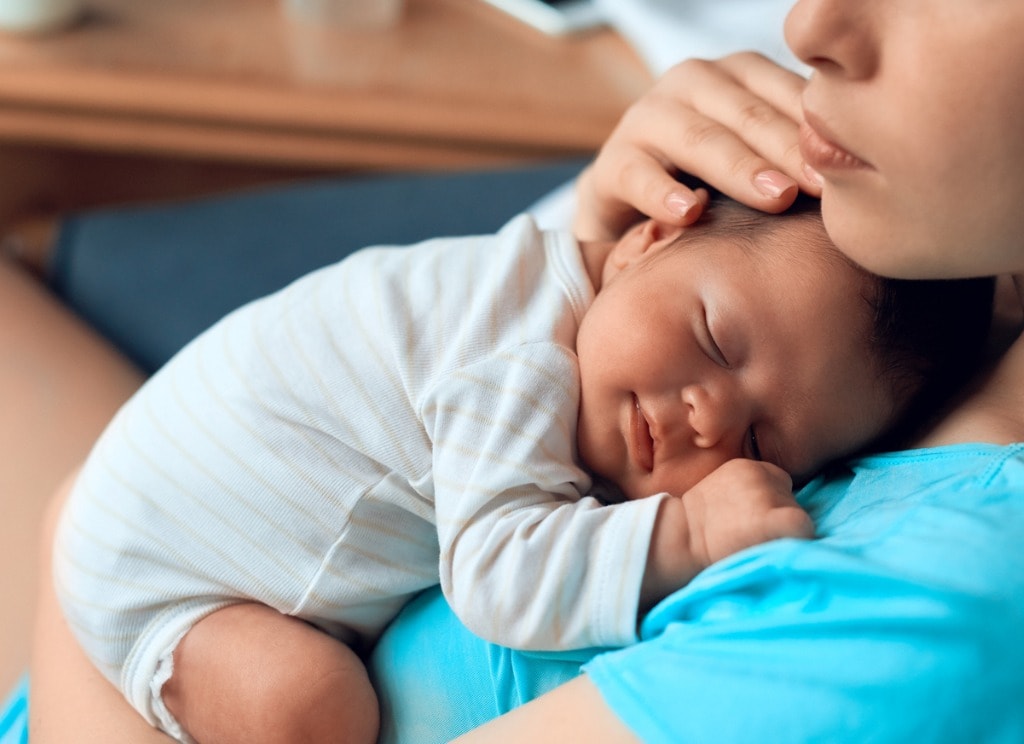 It is important to remember that not all vented bottles are created the same. Research highlights that a vacuum is formed in most reusable feeding bottles, which are either non-ventilated or under-ventilated through various configurations of holes and slits in the teat rim or actual teat.

The non-vented bottle consists of a solid walled vessel with a teat held in place with a cap, thus does not permit any air entry, resulting in the liquid being held within the feeding vessel by the vacuum that is formed while sucking.  Fluid may only be removed by the infant in small amounts and this is accomplished by overcoming the stiffness of the wall of the teat or bottle and thereafter, collapsing one or the other.

As the teat collapses in response to the negative pressure in the non-vented or under-vented bottles, the baby will break its seal at the teat and swallow air along with liquid into the stomach, which causes the windy colic symptoms.  The collapsed teat and bubble induction into the feeding liquid are clear indications that a vacuum is present in the feeding bottle.

In contrast to this, a 100 percent fully vented bottle has an open pathway for air leading from the threads between the bottle neck and the teat collar to an internal reservoir that is in communication with ambient air. In fully vented bottles, the initial teat pressure is positive and remains positive throughout the entire emptying of the bottle; subsequently, ensuring the baby takes in the feed without ingesting air. 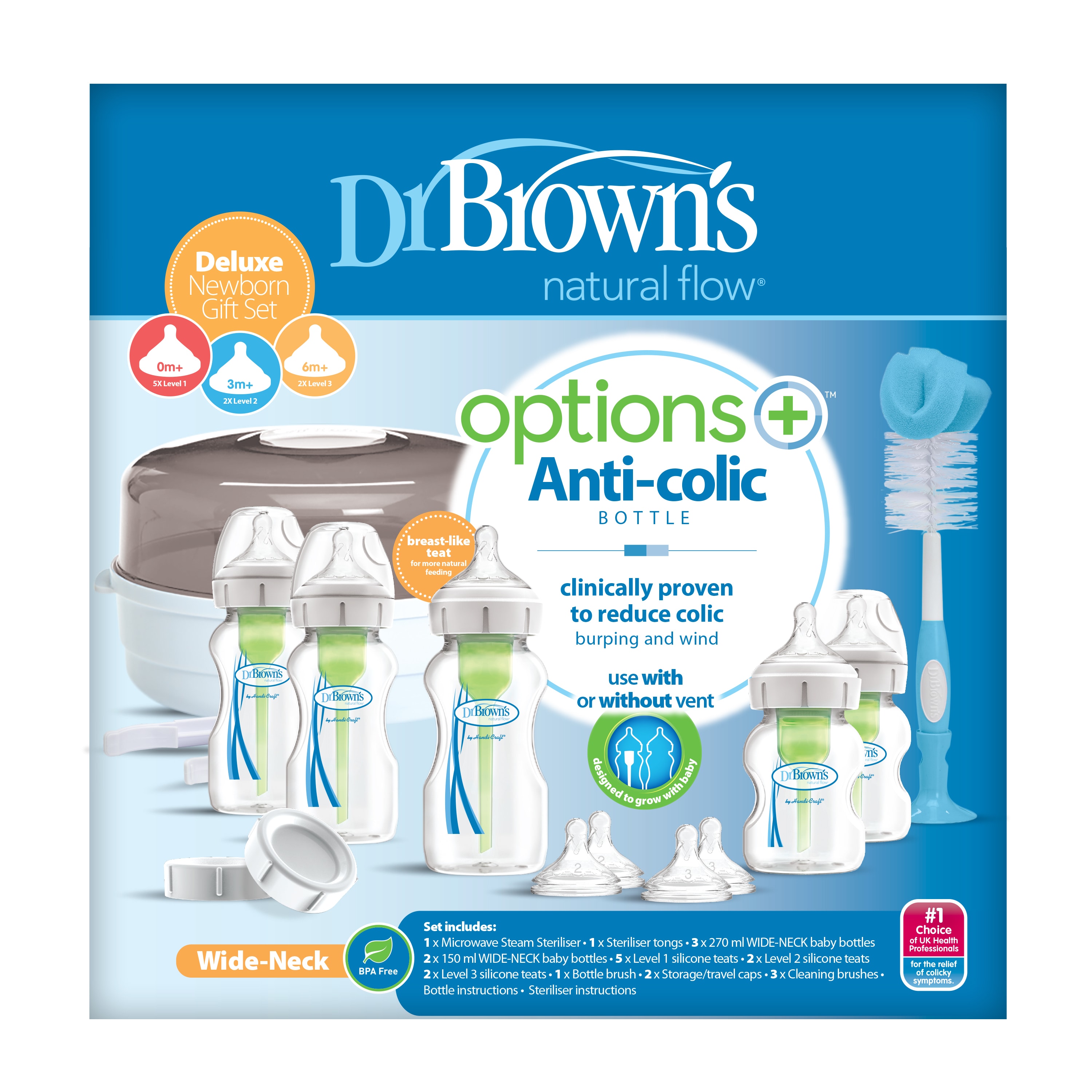 The Dr Brown’s® Options+® unique internal vent system continues to create 100% vacuum-free feeding, which is clinically proven to help reduce windy colic by keeping air out of baby’s tummy. This is what makes Dr Brown’s® the number one choice of UK Health Professionals for the relief of colicky symptoms. 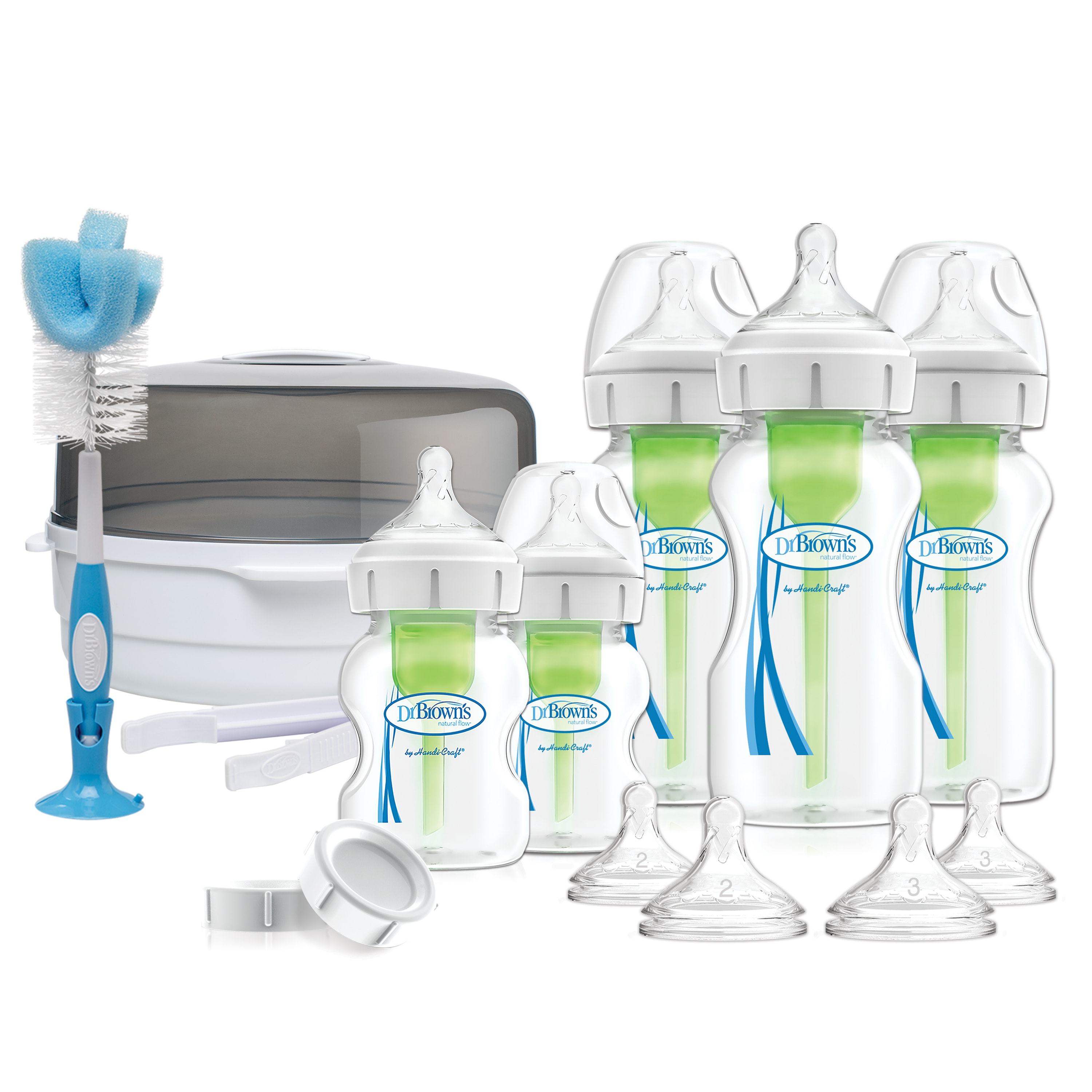 Dr Brown’s® Options+™ grows with baby, allowing easy removal of the vent as baby develops, or no longer experiences feeding problems. Without the vent, Options+ provides a feeding experience similar to most teat-vented bottles. The teat venting creates a controlled flow, offering babies an easy and convenient way to feed at their own pace. 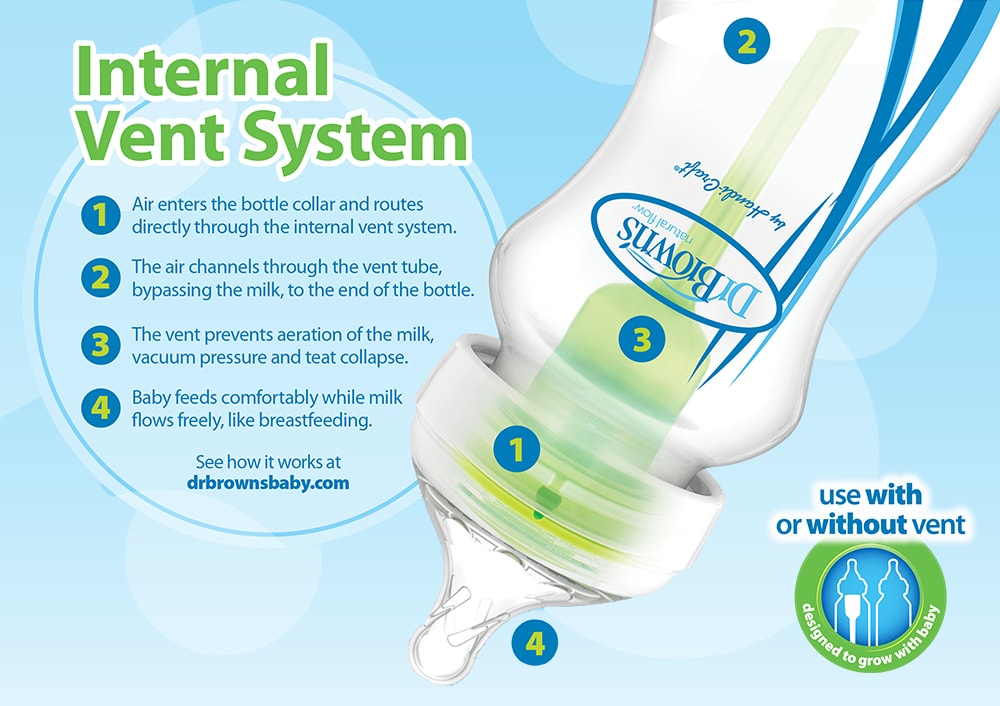 The new Options+ breast-like teat shape is correctly contoured for a proper latch and a more natural bottle-feeding experience - perfect for switching from breast to bottle and back again. Each teat is super soft and specially engineered to offer the same consistent natural flow. 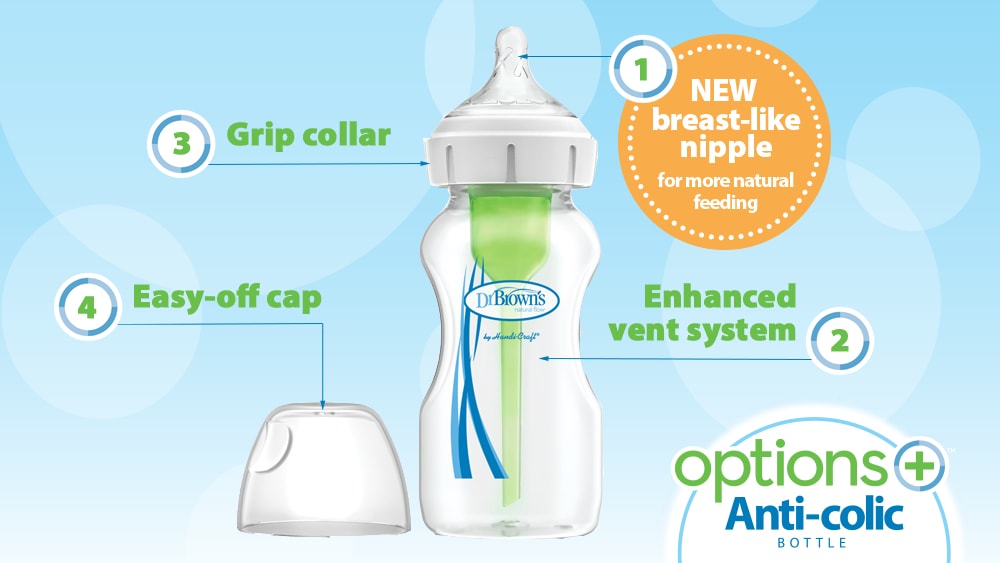 
References
*On the Physics of the Infant Feeding Bottle and Middle Ear Sequela, Ear Disease in Infants Can be Associated with Bottle Feeding - Craig Brown, M.D., D.A.B.F.P. et al.
** Research conducted by Mustard Research Ltd amongst a sample of 200 UK Health Care Professionals during May 2017.