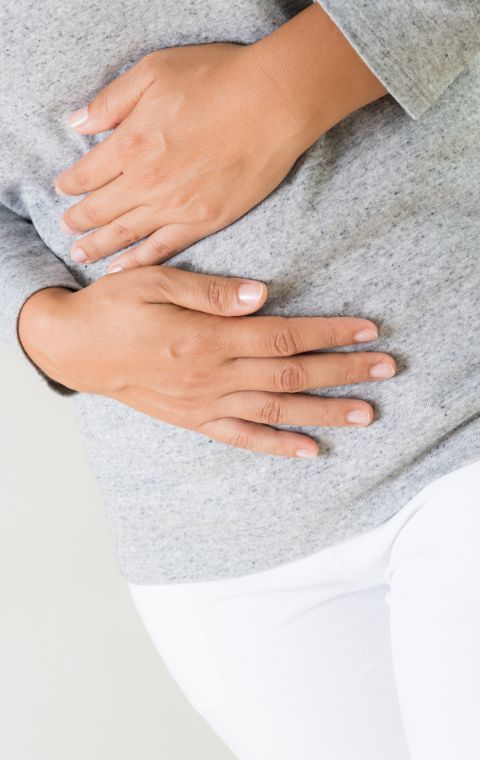 What is a peptic ulcer?

A peptic ulcer is an open sore that develops on the inside lining of the stomach (a gastric ulcer), or the small intestine (a duodenal ulcer). Both types of ulcers are also referred to as peptic ulcer disease.

The most common symptom of a peptic ulcer is a burning or sharp pain in the centre of the stomach.

How common are peptic ulcers?

Peptic ulcers can affect people of any age, including children, but the condition is most common in people who are 60 years of age, or over. Both sexes are equally affected by peptic ulcers.

The leading cause of peptic ulcers is a type of bacteria called H. pylori.

A group of painkillers known as non-steroidal anti-inflammatory drugs (NSAIDs), (e.g. aspirin and ibuprofen), are the second most common cause of peptic ulcers. Most of the time, NSAIDs are safe to use and do not cause any side effects. However, these types of painkillers can irritate the lining of the stomach and small intestine in some people, particularly if they are taken on a long-term basis.

These drugs are medicines commonly used to treat conditions such as:

Due to the risk of getting peptic ulcers, it is usually recommended that you do not use NSAIDs if you currently have a peptic ulcer, or if you have had one in the past.

Both causes disrupt the protective effects of the mucus that lines the stomach. This disruption causes the ulcer to form which, due to the high levels of acid found in the stomach and intestines, is unable to heal naturally. This is why reducing stomach acid levels are often an important part of treatment.

The most common symptom of a peptic ulcer is a burning pain that develops in the centre of your abdomen (stomach). However, the pain can also travel up to your neck and down to your belly-button.

The pain is caused by two factors:

The pain can last from a few minutes to a few hours. It often develops between 2-5 hours after eating food, so many people find that they wake up during the night due to the pain.

The pain is often worse when you have an empty stomach and you will probably find that eating something can help to reduce the pain.

Some people also find that they can no longer tolerate eating fatty foods.

Treatment for NSAID associated peptic ulcers usually involves stopping using the NSAID before using medication to heal the ulcer. If withdrawing NSAID treatment is not possible, additional medication can be used to compensate for the effects of the NSAID.

Complications of peptic ulcers are serious but uncommon and include internal bleeding, which may require emergency surgery.

You should always visit your GP if you suspect that you have a peptic ulcer.

When to seek urgent medical advice

A number of symptoms can develop if a peptic ulcer suddenly causes serious complications, such as internal bleeding. These include:

If you experience any of the symptoms that are listed above, you should contact your GP immediately.

If your peptic ulcer is caused by a H. pylori infection, the recommended treatment plan is a course of antibiotics to kill the bacteria. This is known as eradication therapy.

If your peptic ulcer is caused by NSAIDs, and you do not have a H. pylori infection, your recommended treatment plan is a 1-2 month course of proton pump inhibitors (PPIs). Your use of NSAIDs will also need to be reviewed. For example, an alternative painkiller, such as paracetamol, may be recommended.

If it is thought that your peptic ulcer is caused by a combination of NSAID use and H. pylori infection, you will been given a two month dose of PPIs, followed by a course of eradication therapy.

Eradication therapy involves taking a combination of three different antibiotics. A combination is used just in case the bacteria have evolved a resistance to one or more of the antibiotics.

All three antibiotics can make oral contraception ('the pill') work less effectively so you should use an alternative method of contraception during treatment and for seven days after treatment.

Proton pump inhibitors (PPIs) work by blocking the actions of proteins called proton pumps, which are partially responsible for producing stomach acid. Reducing the amount of stomach acid prevents any further damage to your peptic ulcer, allowing it to heal naturally.

H2-receptor antagonists work by blocking the actions of a protein called histamine which is also responsible for stimulating the production of acid.

All of the treatments discussed above can take several weeks to become effective, so it is likely that your GP will recommend some additional medication to help provide short-term relief from your symptoms.

Both antacids and alginates are over-the-counter (OTC) medications that are available from pharmacists. The pharmacist will be able to advise you about which particular types of antacid and alginate are most suitable for you.

If your peptic ulcer has been caused by taking NSAIDs, your GP will want to review your use of NSAIDs.

You will usually be advised to use an alternative painkiller that is not linked to peptic ulcers, such as paracetamol, or a low-dose opiate-based painkiller.

Perforation means that the ulcer has eaten through all of your stomach lining.

Perforation is potentially very serious because bacteria that live in your stomach can move out of your stomach and infect the lining of your abdomen (peritoneum). This is known as peritonitis.

In peritonitis, an infection can rapidly spread into the blood (sepsis) before spreading to other organs. This carries the risk of multiple organ failure and, if left untreated, death.

The most common symptom of peritonitis is the sudden onset of abdominal pain that then gets steadily worse.

Peritonitis requires admission to hospital where you will be treated with injections of antibiotics to get rid of the infection. Surgery is then used to seal the hole in the stomach wall.

In some cases, a peptic ulcer can produce inflammation (swelling) and /or scar tissue that can obstruct the normal passage of food through your digestive system. This is known as gastric obstruction. Gastric obstruction occurs in an estimated 5-8% of cases of peptic ulcers.

Symptoms of gastric obstruction include:


Living with an ulcer

You can reduce your risk of developing an ulcer or relieve the severity of your symptoms by making some lifestyle changes:

Stress can cause your stomach to produce more acid. This won't necessarily cause an ulcer, but it can make your symptoms worse. Try these tips for de-stressing:

Visit your local CarePlus pharmacy for any advice or assistance you may need.