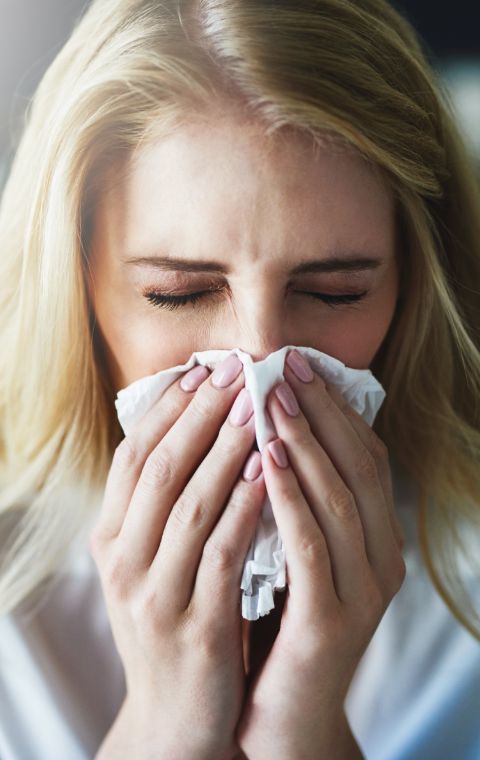 Allergic rhinitis is a condition in which an allergen (something that causes an allergic reaction) makes the inside of your nose swell or become inflamed. This can cause cold-like symptoms, such as sneezing, itchiness and a blocked or runny nose.

Allergic rhinitis is not usually harmful, but the symptoms can be irritating and affect your quality of life. Identifying the allergen that causes your rhinitis and, if possible, avoiding it is an important first step in managing the condition effectively.

Once diagnosed, mild cases of allergic rhinitis can usually be treated using over-the-counter medicines. However, more serious cases may require treatment with a corticosteroid nasal spray or antihistamines prescribed by a GP.

The common symptoms of allergic rhinitis include:

The symptoms of allergic rhinitis normally begin soon after exposure to an allergen.

Most people with allergic rhinitis experience mild symptoms that can be easily and effectively treated. However, for some, the symptoms can be more severe and persistent, causing problems with sleep and interfering with everyday life.

Allergic rhinitis is caused by an oversensitive immune system (the body's natural defence system against infection) reacting to allergens, such as pollen, as if they are harmful. The immune system reacts by producing antibodies to fight off the allergen. Antibodies are special proteins contained in blood that are normally made by the immune system to fight off viruses and infections.

Allergic reactions do not happen the first time you come into contact with an allergen. The immune system has to recognise and memorise the allergen before making antibodies against it (a process known as sensitisation). The time taken to become sensitised to an allergen varies from days to years.

Once you have developed sensitivity to an allergen, whenever particles of the allergen come into contact with the inside of your nose and throat, antibodies called immunoglobulin E (IgE) are released. These cause blood cells to release chemicals (including histamine), which together cause the symptoms of allergic rhinitis.

Allergic rhinitis is triggered by breathing in tiny particles of allergens. The most common airborne allergens that can cause rhinitis are:

Who is at risk?

Environmental factors also play a part in the development of allergic disorders such as rhinitis. The exact role of the environment is unknown, but studies have shown that a number of factors seem to increase the chance of a child developing atopy, such as:

Your GP can usually diagnose allergic rhinitis by asking about your symptoms and your personal and family medical history. They will also ask about any triggers that seem to cause a reaction, and whether it happens at a particular place or time.

If the exact cause of your allergic rhinitis is uncertain, you may be referred for allergy testing.

Two tests that may be carried out are:

The use of commercial allergy testing kits is not recommended. The testing is often of a lower standard than that provided by the health services. Also, it is important that the results of the test are interpreted by a qualified professional who has detailed knowledge of your symptoms and medical history. 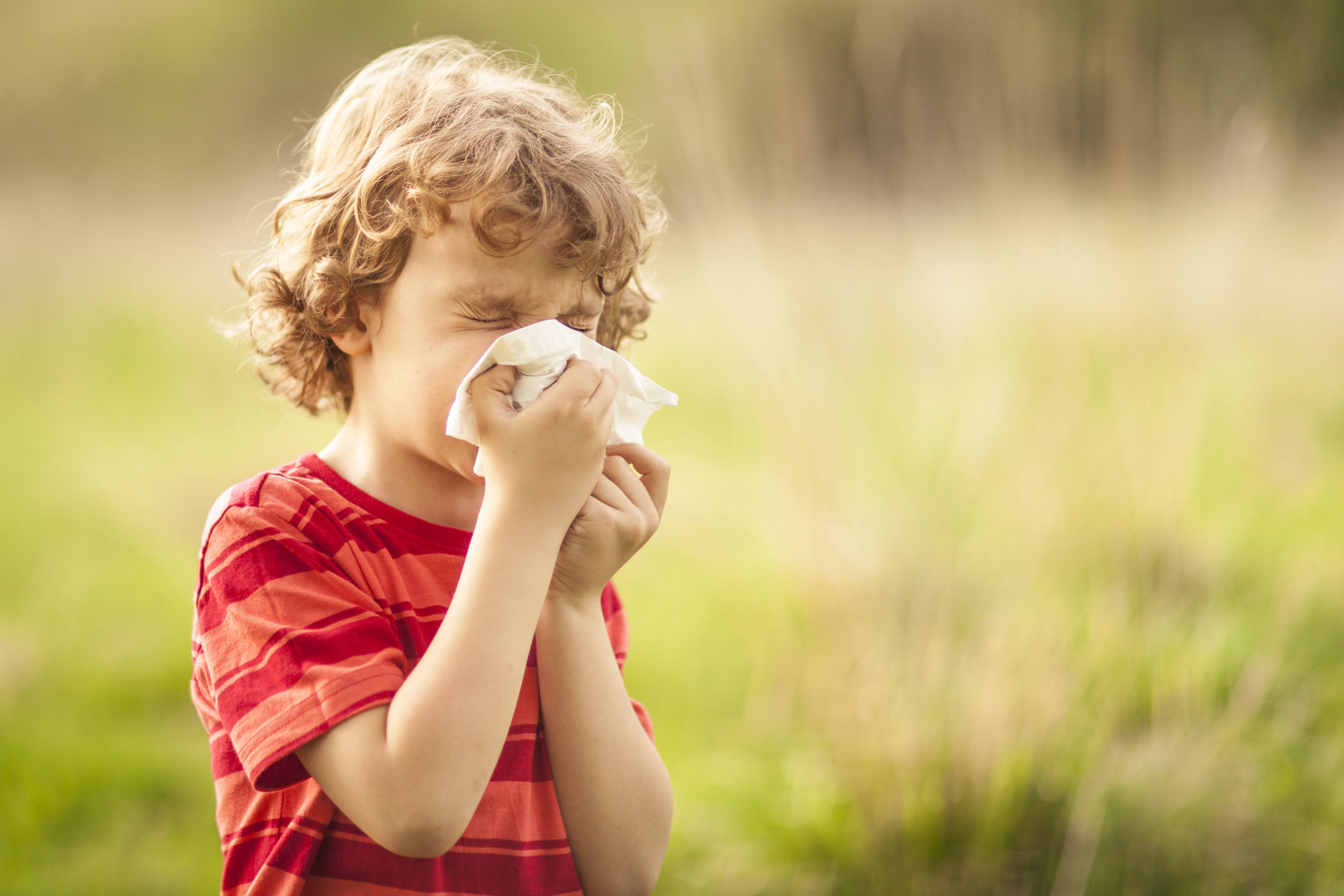 See your GP if your allergic rhinitis is:

If the symptoms of allergic rhinitis are mild, you should be able to treat the condition yourself by:

If your symptoms are more severe, affecting your quality of life, and self-help measures are not effective, see your GP. The treatment options are described below.

Medication will not cure your allergy, but it can be used to treat the common symptoms of an allergy, such as a runny nose, itchy mouth and sneezing.

If your symptoms are caused by seasonal allergens, such as pollen, you should be able to stop taking your medication after the risk of being exposed to the allergen has passed. However, if your allergic rhinitis is caused by non-seasonal allergies, such as dust mites, you may require ongoing treatment.

Treatment for allergic rhinitis is generally the same for adults and children. If you are pregnant, you can take some antihistamines and corticosteroids. It is usually recommended that you use a nasal spray rather than taking tablets to minimise any risk to your unborn baby.

See your GP if your symptoms do not respond to medication after two weeks.

Antihistamines relieve symptoms of allergic rhinitis by blocking the action of the chemical histamine, which the body releases when it thinks it is under attack from an allergen. Antihistamine tablets are available over the counter without prescription from your pharmacist, but antihistamine nasal sprays are only available with a prescription.

If your symptoms are frequent or persistent and you have a nasal blockage or nasal polyps, your GP may recommend that you use a nasal spray or drops containing corticosteroids.

If you have a particularly severe bout of symptoms and need rapid relief, your doctor may prescribe a short course of corticosteroid tablets for 5 to 10 days.

Decongestants are usually available over the counter and can help relieve a blocked nose. They can be taken as tablets, capsules, nasal sprays or liquids.

Nasal decongestants should not be used to treat allergic rhinitis for more than five to seven days. Using them for longer can make your congestion worse.

If you are taking a type of antidepressant known as a monoamine oxidase inhibitor (MAOI), do not use nasal decongestants.

These are fleshy swellings that grow from the lining of your nose or your sinuses (the small cavities inside your nose). They are the result of inflammation (swelling) of the membranes of the nose and are sometimes caused by rhinitis.

A nasal polyp is shaped like a teardrop when it is growing and looks like a grape on a stem when fully grown. Nasal polyps may be yellowish, grey or pink in colour and vary in size. They can either grow on their own or in clusters, and usually affect both nostrils.

If they grow large enough or if they grow in clusters, nasal polyps can:

Smaller polyps can be shrunk using corticosteroid nasal sprays so that they do not cause any obstructions in your nose. Large polyps may need to be surgically removed.

A common complication of rhinitis is sinusitis.

Follow the advice below to avoid some of the most common allergens:

Concentrate your efforts on controlling dust mites in the areas of your home where you spend the most time, such as the bedroom and living room.

It is not the pet fur that causes an allergic reaction, but exposure to flakes of their dead skin, saliva and dried urine.

If you are visiting a friend or relative with a pet, ask them not to dust or vacuum on the day you are visiting, as this will stir up the allergens into the air. Taking an antihistamine medicine one hour before entering a pet-inhabited house can help reduce symptoms.

Different plants and trees pollinate at different times of the year, so when you get allergic rhinitis will depend on what sort of pollen(s) you are allergic to. Typically, people are affected during the spring and summer months because this is the time of year when most trees and plants pollinate. To avoid exposure to pollen:

Hay fever is a type of allergic rhinitis caused by pollen or spores.

Hay fever affects the nose, sinuses (small air-filled cavities behind your cheekbones and forehead), throat and eyes. It causes:

Hay fever usually occurs in spring and summer, when there is more pollen in the air. Trees, grass and plants release pollen as part of their reproductive process.

Mould and fungi also release tiny reproductive particles, called spores. Hay fever symptoms usually begin when the pollen count is over 50. The pollen count is usually given as part of the weather forecast during the spring and summer months.

How common is it?

Hay fever is a common condition that is estimated to affect around 20% of people. It is more likely if there is a family history of allergies, particularly asthma or eczema.

Hay fever cannot be cured completely, but there are a number of treatments available to relieve symptoms, such as those listed above for treating allergic rhinitis.

Antibodies are proteins that are produced by the body to neutralise or destroy disease-carrying organisms. If you have hay fever, your body produces an antibody called Immunoglobulin E (IgE) when you come into contact with pollen or spores.

The production of IgE triggers the release of a number of other chemicals, including a protein called histamine. These chemicals then cause the symptoms of the allergic reaction, such as watering eyes and a runny nose.

What are you allergic to?

In Ireland, most people with hay fever are allergic to grass pollen. However, trees, mould spores and weeds can also cause hay fever. Research suggests that pollution, such as cigarette smoke or car exhaust fumes, can make allergies worse.

The amount of sunshine, rain or wind affects how much pollen plants release and how much the pollen is spread around. On humid and windy days, pollen spreads easily. On rainy days, pollen may be cleared from the air, causing pollen levels to fall.

During their pollen season, plants release pollen early in the morning. As the day gets warmer and more flowers open, pollen levels rise. On sunny days, the pollen count is highest in the early evening.

If you suspect that you have hay fever, you may want to discuss it with your pharmacist or your GP to confirm the diagnosis. This will help you decide whether you need treatment and rule out anything else that could be causing your symptoms, such as an infection.

Your GP will usually be able to make a diagnosis from a description of your symptoms. If possible, keep a diary of what times of the day or year you experience your symptoms, as this can help with the diagnosis.

A skin prick test may not be suitable if:

In this case, a blood test may be necessary to confirm your diagnosis.

It is very difficult to completely avoid pollen or spores. However, reducing your exposure to the substances that trigger your hay fever should ease the severity of your symptoms. Follow the advice below to avoid being exposed to excessive amounts of pollen and spores.

Visit your local CarePlus pharmacy for any advice or assistance you may need.